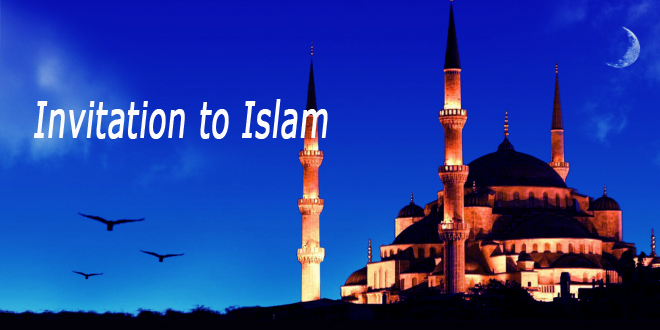 There is only one God we call “Allah” and he created all the visible and unvisible things alone by using his unlimited power and knowledge. This means the owner of all the mankind, universe, animals, nature is Allah himself.

He also send nearly 124.000 prophets and a lot of messages (written or not) to mankind through the centuries just to invite human to believe in himself (to correct the wrong road) not the devil or something else who was created.

He wanted humans to believe in him and obey him and obey his rules under the cover of religion. But there is something important that all his orders and warnings and good news about heavens were the same and all the religions were parts of a huge religion called monotheism.

Islam is the last list of celestial orders and the Quran is the last celestial unmanipulated book of Allah. The Prophet Muhammed is the last one to invite not only his community but all the mankind to Allah. Islam also the name of the religion which will stay valid till doomsday.

Of course the other prophets and celestial books were also sent by Allah but the cruel mankind manipulated those books and forgot the rules of prophets and even they killed lots of prophets. That’s why the Quran is the last and only protected and acceptable book.

If a human is looking for Allah the adress and the true path to heavens must be Islam and Quran.

Because there is a most important and effective rule about belief and it is to believe in only Allah not the others. This means there is no other God and this means Allah has no child, no helper, no son, no daughter, no family etc. Especially the Trinity belief in Christianity (father, mother and son) is the enemy of this pure belief. The others religions also have some doubts, people, creatures or Gods nearby or helper to real and just the owner of the power, Allah.

It was a great and unforgiveable sin to obey other Gods nearby Allah. This is so serious in Islam that ıf someone believe in this way its impossible for him to go any heaven at any time and this false belief cause him to go hell till infinity.

On the other hand not to believe in Allah is also a great sin but Allah says that “he/she will do believe one day and I am ready to forgive him/her. Because he/she still doesnt know the truth.” That means not to believe is better than believe in a number of Gods. Because most of the other Gods are false and especially one of them, the devil, is the real and most powerfull enemy of all humans. Allah says to him(her that “No other creatures can be God. I am the only and real God and I created everything. I dont have any helper, son, family, similiar, partner. This is my number one rule. And you, all the mankind gave me promise about this before their births. So ıf you make wrong and forget your promise I will forget my promise (to send you to heaven) too.”

Faith is to believe in only Allah. The other ways are all wrong.

The Islam is based on belief in the One God, who is not similar to anyone else, and no one and nothing is comparable to Him. Islam means “obedience to God” and the word Muslim “man, who is obedient (submissive) to Only God.”

All the prophets knew and talked to their communities that there will be “seal of all prophets and messengers” – Muhammad (peace be upon him), and among all of them there is an absolute continuity. A person submitted to God must believe in all the prophets and messengers, and recognize their mission, otherwise he will not find the true faith, and true believer – is a man completely obedient to the will of the Lord, and such person is a Muslim. The belief in Allah and belief in His prophets is a pillar of the Muslim faith.

All the prophets were obedient to God, that is, Muslims. Allah has commanded in the Qur’an to those who follow the Prophet Muhammad (peace be upon him), to believe in Allah and in what has been sent down by Him through all the prophets, that is, recognize the Quran and other divine Scriptures: the Torah, the Psalms, the Gospel, the message of the prophets. Allah said that there is no difference between the prophets: all of them are – the Muslim brothers. The Prophet Muhammad (peace be upon him) said: “The best words which I, and all prophets before me, said are: La ilaha illAllah” (there is nothing worthy of worship except the One God – Allah). Therefore, Muslims recognize, believe, love and revere all the prophets.

It is necessary to recognize all the prophets, but one should not deify any one of them, for they are the creation of God, created by Him. None of the prophets taught the people to worship them or some other creatures, because it would be leading to paganism and delusion from which they were saving people.

Acceptance of Islam is not a betrayal of Christianity and the teachings of Jesus Christ – on the contrary Muslims like the son of Mary (peace be upon him) and honor him because he is a great prophet of God. To be a Muslim – is to follow the precepts of Jesus (peace be upon him), including a covenant that after him comes a new mediator and intercessor for humanity. Muslims await the second coming of Jesus to the earth, after which he will lead the community of Muslims, and to all the faithful there will come calm and harmony after long oppressions.

Belief – is a private matter of each individual, and there is no compulsion in Islam.

Who sincerely believed and accepted in heart the faith taught by the prophets Adam, Noah, Abraham, Moses, Jesus, Muhammad and all other prophets (peace be upon them), he should say aloud the following testimony of Monotheism (Shahadah) with the intent to convert to Islam:

Also someone must say and believe these sentence to be a muslim;

In other way of saying;

“I testify that there is nothing worthy of worship except the One God – Allah, and I bear witness that Muhammad – is His prophet and messenger.”

If one cannot say the words in Arabic, he says to them in a language he knows. From this point the person becomes a Muslim, that is, obedient to Only God, and his life begins anew. All previous sins are forgiven, and he, clean like a newborn baby, enters into a new life.

Acceptance of Islam does not require carrying out official events inviting witnesses, walking to the mosque, etc.

Rather it is sufficient enough to sincerely believe in heart and say Shahada by himself. Changing the name is not a prerequisite for becoming a Muslim, but if he wants a person can take a name characteristic of the Muslim tradition. Right after the adoption of Islam it is desirable for the man to bathe.

After acceptance of Islam, not all people can understand him correctly, as in society, there are certain fears and false stereotypes about Islam, formed thanks to the activities of pseudo-religious sects and movements. But the truth is that Islam has nothing in common with terror, and the true Muslim cannot sow evil on earth.

In Islam, there is no such requirement that those who became Muslims should officially announce about their faith. But everyone has to follow the teachings of Islam. For those who chose the path of Islam, their earlier committed sins are forgiven, and they can intercede on the Day of Judgment for their relatives and friends that Allah pardoned them.

All Muslims are each other’s brothers and sisters.

The six components for the Muslim faith are:

The bases of Islam

1. Iman – faith in all that has been sent down in revelation from Allah.

2. Islam – submission to all the commandments and prohibitions of Allah.

3. Ihsan – conformity of one’s language, heart and deeds with all the requirements of religion of Islam, that is to worship the Creator sincerely and perfectly.

More information about the basics of Islam and what it means to be a Muslim, you will find on our site. All your questions regarding the Islamic faith and Muslim life, will be answered by our scholars. Ask – and we will answer!

Muslim – is the happiest man in this world, and in eternal life paradise and contentment Lord of the worlds is waiting for him!

Allah is the only God and all the religions were sent by Him. All the celestial books and prophets chosed and sent by Him (mostly via angels) and all religions sign us monotheism.

There is no helper, similiar, son or daughter of Allah (no trinity belief) and He created everything with His huge, matchless and endless power and knowledge.

Islam is the last and protected religion with his book “Quran” and this means for all the human being there is only one belief under the umbrella of faith.

Devil is the most powerful and liar enemy of all mankind.

One must learn Islam from Quran and change himself in that way. To see muslims alive and just copy their way of religious life is not the real answer. Because the pure Islam and the muslims false and unconscious way are different.

All other religions and beliefs are outdated/ falsified and only Islam is valid religion till doomsday.

It’s a choice to believe or not but Allah says in Quran that everybody (borned after the Quran) will be judged in hereafter (afterlife) from Quran.

This is an invitation to all other beliefs and humans.

Islam is the only solid and strong way to believe.

And the life will shortly come to an end or everbody will die oneday. There the reality will be seen and everybody will understand all the meanings of sentences of Allah. But faith is a issue that to believe before seeing.

Brain, mind, soul, consciousness were just given to human to see the real life, find the real religion and testify Allah before dying. Because His signs are everywhere; in Quran, in body and universe.

One must believe in only Allah and obey Islamic rules for salvation.

Önceki What is the Quran?
Sonraki Bir fark olmalı, olacaktır 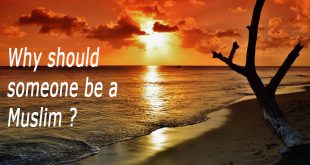 Why should someone be a Muslim? There are many people who follow the teachings of ...